Steam sometimes causes condensation, and condensed water loses less energy at low pressure. The steam after decompression reduces the pressure of condensate and avoids the flash steam when it is discharged. The temperature of saturated steam is related to pressure. In the sterilization process and surface temperature control of paper dryer, pressure relief valves are needed to control the pressure and further control the temperature. Some systems are with high-pressure condensate water to produce low-pressure flash steam to achieve the purpose of energy-saving when the flash steam is insufficient or steam pressure exceeds the set value where needs a pressure reducing valve.

On start-up and with the adjustment spring relaxed, upstream pressure, aided by a return spring, holds the valve head against the seat in the closed position. Rotating the handwheel in a clockwise direction causes a downward movement, which compresses the control spring and extends the bellows to set the downstream pressure.

This downward movement is transmitted via a pushrod, which causes the main valve to open.

Steam then passes through the open valve into the downstream pipework and surrounds the bellows. As downstream pressure increases, it acts through the bellows to counteract the adjustment spring force, and closes the main valve when the set pressure is reached. The valve plug modulates in an attempt to achieve constant pressure.

In order to close the valve, there must be a build-up of pressure around the bellows. This requires an increase in downstream pressure above the set pressure in proportion to the steam flow.

Any variation in the inlet pressure will alter the force it produces on the main valve and so affect the downstream pressure.

Larger capacity direct acting pressure reducing valves are also available for use on larger capacity plant, or on steam distribution mains. They differ slightly to the smaller capacity valves in that the actuator force is provided by pressure acting against a flexible diaphragm inside the actuator rather than a bellows.

As these are not pilot-operated, they will incur a change in downstream pressure as the steam flow changes, and this should be taken into careful consideration when selecting and sizing the valve. 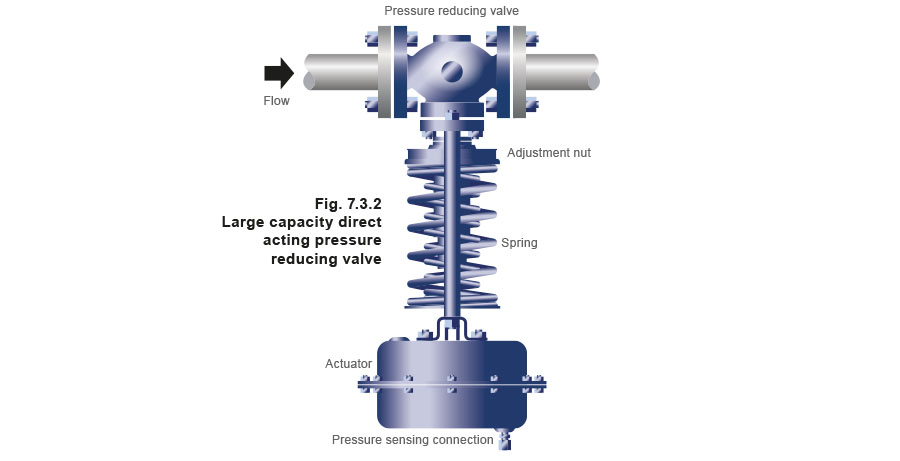