Actuator :
By themselves, valves cannot control a process. Manual valves require an operator to position them to control a process variable. Valves that must be operated remotely and automatically require special devices to move them. These devices are called actuators.

Actuators may be pneumatic, hydraulic, or electric solenoids or motors.

Pneumatic Actuators :
A simplified diagram of a pneumatic actuator is shown in Figure 1. It operates by a combination of force created by air and spring force. The actuator positions a control valve by transmitting its motion through the stem.

A rubber diaphragm separates the actuator housing into two air chambers. The upper chamber receives supply air through an opening in the top of the housing. 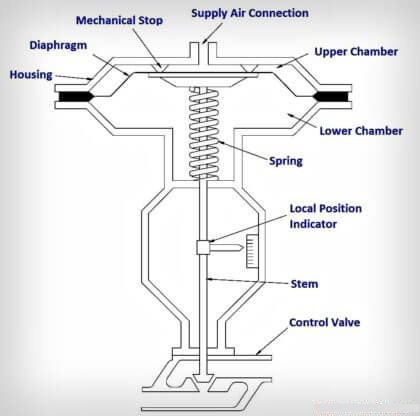 The bottom chamber contains a spring that forces the diaphragm against mechanical stops in the upper chamber. Finally, a local indicator is connected to the stem to indicate the position of the valve.

The position of the valve is controlled by varying supply air pressure in the upper chamber. This results in a varying force on the top of the diaphragm. Initially, with no supply air, the spring forces the diaphragm upward against the mechanical stops and holds the valve fully open.

Conversely, if supply air pressure is decreased, the spring will begin to force the diaphragm upward and open the control valve. Additionally, if supply pressure is held constant at some value between zero and maximum, the valve will position at an intermediate position. Therefore, the valve can be positioned anywhere between fully open and fully closed in response to changes in supply air pressure.

A Positioner is a device that regulates the supply air pressure to a pneumatic actuator. It does this by comparing the actuator’s demanded position with the control valve’s actual position. 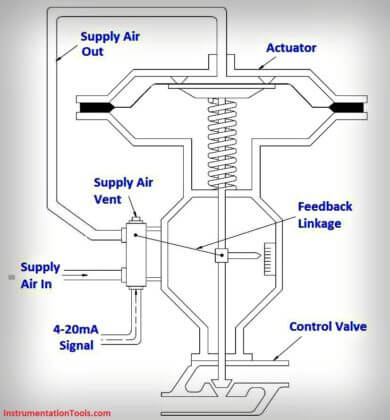